Samadhi is a Natural consequence of the practice towards knowing our true nature. Through deep and purified consciousness. Samadhi is only a deep state of consciousness, but not usual consciousness. It is a state of temporary withdrawal from the ego, often accompanied by a deep realization and an ecstatic state, especially when it is experienced the first time. It’s a gradual, deep track, like a stone going slowly to the depths of a seemingly bottomless lake. Unlike the instant satori, the ego simply disappears there, torn from the illusion it exerts on us, it gives way to the experience of reality without masks and judgments, the ease of the ego-free.

The way of cessation consists in the search for samadhi, by any practice gradually allowing concentration and a calm and serene mind, thus experimenting more and more subtle forms of consciousness. In these states it may seem that self-consciousness disappears for longer and longer moments, from its moments can emerge deep realizations. Cessation is therefore the way of calm, of progressive pacification of the body, of breaths and thoughts. It is a fabulous means which can lead to experiences of the same nature of Satori, kenshos (moments of deep realization by the momentary withdrawal of the ego, often experienced as ecstasies or beatitudes.

But it is very different from Satori, from what I have studied, practiced and especially received from Ming Zhen and all my masters: it is the same nature this (a withdrawal of the ego which allows to taste directly what is ) but it is different in two ways: its sudden appearance and its profound implications.

It’s no longer a temporary withdrawal from the ego, it’s an ego to be taken out of this body, and out of awareness of who we are: neither an ego / mind, nor a physical body, nor anything that is outside of that … here is a fundamental gongan!

The experience is stronger and above all more lasting. Attention, this experience, the satori, also lasts only a few seconds, after this experience the ego is still BUT it no longer takes, it’s like “having seen the world through the eyes of the mountains and going back to live in the body of an ant ”, you don’t get caught.

We have had a real experience of the fact that there is no differentiated thing called ego, neither with us nor with others, only houses of cards that we build like children. We have built chimeras and we firmly believe in them, more firmly than what we are told about the reality of our deep experiences.

Our way is, by the practice of the concentration in zuo chan to reach the cessation (of which the achievement is gradual and carrying experiences, but attention !!! Once reached, samadhi has nothing gradual, l ‘to reach is to see the earth of the spirit, to understand how our spirit really is. But there is still the presence of doubts, of the ego and these games, in short it is not yet satori.

From there, we practice simplicity, the naturalness of zazen, or we continue what we practiced with simplicity. We recognized the nature of his spirit and we practice the return, « residing and living simply according to the precepts ».

So we polite ourselves, while waiting for the right moment, of the harmony which suddenly, after years of practice ranging from concentration to cessation, from cessation to samadhi, to the realization of samadhi as “serene naturalness”, has the experience of satori. No more ego or traces of doubt, just certainty and freedom!

It is a journey that corresponds to the main phases of our lineage, the Indian patriarchs bequeathed us the sutras, the precepts and the practices of concentration and observation which leads to Cessation and to the Samadhis, the Chinese Patriarchs bequeathed to us the Samadhis based on naturalness, and the masters succeeding them the practices leading to just practice, and differences, from Samadhi THEN, after years of practice, to the suddenness of Satori. (Those who transmitted gongans and Huatou to us to see our Spirit directly (Linji, Yunmen, Chenglu), and those who left us the calm and serene way, and direct, the royal zuochan or zazen (Chihi, Bodhidharma, Huineng, Huangpo) , to deepen our harmony with what is, waiting WITHOUT WAITING !!!, since everything is already there, the Satori which will only be fortuitous and sudden. Masters like Hanshan and HsuYun have transmitted to us the whole Buddhist way, anchored in the Chinese Mahayana and allowing us to make this journey in ourselves, towards ourselves and the world. 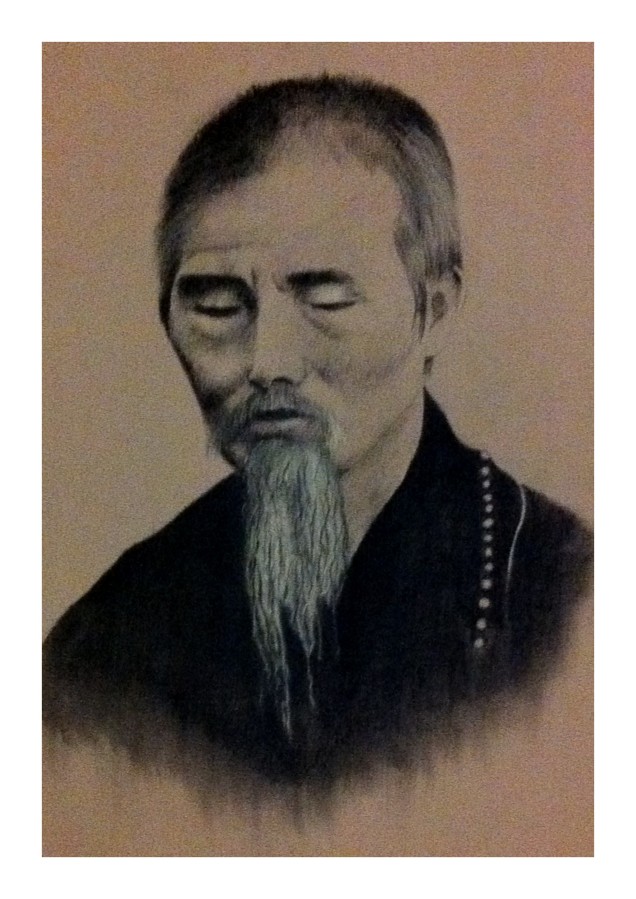